"Pascal's Wager" is as follows:

(b)   If God doesn't exist, then whether or not people believe in him doesn't matter very much. The worst that's happening is that Christians are going around living good, clean, honest lives, and they die with a happy (but false) hope in their hearts; thereafter they simply rot in the grave, just like the non-believers.

In other words, from a practical point of view, your best bet is to become a Christian just in case Christianity is valid.   "You have everything to gain, and nothing to lose."

What is wrong with this argument?

1.   It makes the false assumption that there is only one possible true religion, i.e., Christianity.   The "wager" implies that either (1) Christianity is valid or (2) there is nothing supernatural, no afterlife, and no (true) religious system at all.   In other words, it assumes that THERE ARE ONLY TWO POSSIBILITIES.

The philosophers call this a false dichotomy.   As in, "Are you going to stay in college and waste your life, or do you want to start your future TODAY with the Texas Truck Driving Academy?"

Isn't there a THIRD possibility ... that some OTHER religious system is valid?   Islam?   Wicca?   Buddhism?

There's a rather frightening possibility not contemplated by Pascal's Wager: that accepting Christianity and following Jesus all your life could have HORRENDOUS consequences.   The devout Christian dies, goes to stand before the Judgment Throne, and sitting upon the throne is ... ALLAH !!!   Allah says, "Guess what?   I'm the real deal, not Jesus, not Yahweh.   Satan, please escort this misguided fellow down to the hot place."

2.   You DO have a lot to lose by following a false religion (that is, Christianity, if it's a false religion)   —   even if the actual truth is that there is NO valid religion (that is, if there isn't a TRUE religion that you're offending by following Christianity).   It's a waste of 76 years of existence on earth to follow a patriarchal, mean-spirited, judgmental religion that permits slavery and treats women as second-class citizens.   It restricts your personal freedom, and you get nothing in return. 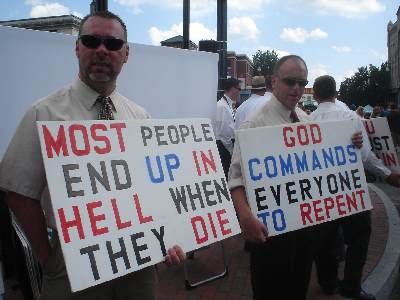 The "wager" is not an honest argument for belief.   It is an attempt to extort belief through fear.