Abraham and the Stone Gods

This story comes to us from our Islamic friends.   Abraham is one of their heroes, as he is with the Jews and Christians.

Abraham once lived in a far-off country among people who were idol-worshippers.   Abraham worshipped the One True God who prohibited the making of graven images.

"We have a favor to ask of you, Abraham.   We are about to travel to a distant land, and we need someone to guard our stone gods.   Can you pitch your tent in our Garden of the Gods for a month, and guard them for us?"

Abraham agreed to do so.

His neighbors mounted their camels, and their caravan disappeared over the horizon. 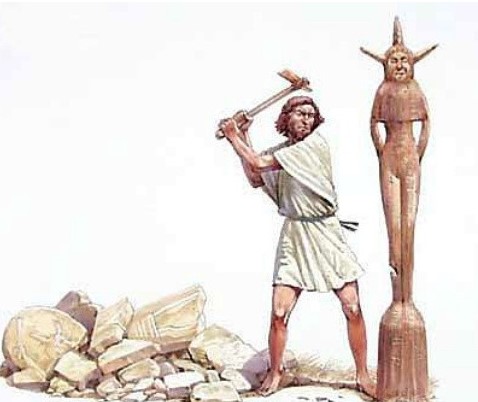 Abraham stood there in the Garden of the Gods, surrounded by towering idols.   As soon as his neighbors were gone, he tied ropes to the statues, one by one, and toppled them.   Then he took an iron hammer and smashed them to pieces.   Every single one.

When his neighbors returned, they were astonished at what they saw.   "Abraham!   We trusted you!   What happened?"

"Well," said Abraham, "after you left, your gods came to life and started talking to one another.   Soon they were arguing as to which of them was the mightiest.   They began to fight, and they destroyed each other."

Eyebrows were raised.   "Abraham, do you really expect us to believe this?"